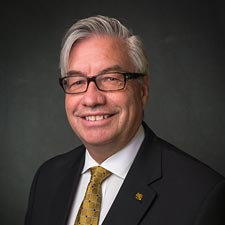 Bart Patterson was appointed as the seventh president of Nevada State College (NSC), Nevada’s fastest growing college, in April 2012 after serving as interim president for six months.  In early 2017, he will become the longest serving President in the College’s history.  Bart has established the top priorities of NSC to continue building quality, affordable academic programs to boost the economy of southern Nevada, increase student success, and identify public-private partnerships to creatively build out NSC’s 509 acre site in the foothills of Henderson.  These goals will be achieved with a deserving student population and the dedication of NSC’s talented faculty and staff, who are accomplished scholars, teachers and mentors.

Nationally, Bart serves on the Council of Representatives and the Grant Resource Center of the Association of State Colleges and Universities, as well as being a frequent speaker and panelist on higher education issues. Locally, Bart serves as a board member of various community organizations including the Henderson Chamber of Commerce, Dress for Success Southern Nevada (chair), Workforce Connections (program chair), Got Core Values (chair), Jobs for America’s Graduates, and serves on the Board of Trustees for the Las Vegas Global Economic Alliance.  As a community representative, Bart was awarded the Las Vegas Latin Chamber of Commerce Chairman’s Award of Excellence for Community Leadership & Higher Education in 2012, he has been recognized as a Señor of Excellence by the Latin Chamber of Commerce in 2015, and he was honored with the Jim Rogers Spirit of Education Silver State Award in 2016.

Before being selected President, Bart previously served as the Nevada System of Higher Education’s (NSHE) Chief Counsel commencing in August 2006 and then as the Vice Chancellor of Administrative & Legal Affairs in September 2009.  He also served the NSHE as the first general counsel for the Community College of Southern Nevada and NSC. Patterson is an adjunct instructor in public policy at NSC. Prior to joining NSHE, Patterson was in the private practice of law.