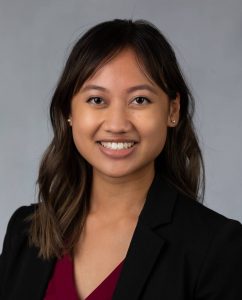 Catrina Fabian is a second generation Filipino American whose core mission is to empower others to live fulfilling lives. She graduated with her Doctor of Physical Therapy degree from the University of Nevada, Las Vegas. With a special focus on the pelvic floor and women’s health, areas that are underserved in her field, she is elevating the wellness of her hometown as a pelvic health and orthopedic physical therapist.

Catrina knows that there is strength to be gained after adversity. She understands that this is possible when people are provided with the right resources, and that is why she volunteers with B.E. A S.H.E.R.O. Foundation. As Teen Liaison Chair, Catrina enjoys mentoring the organization’s Teen Board.

If she were a superhero, Catrina would be DC Comics’ Barbara Gordon. After being paralyzed as Batgirl from the waist down, Barbara Gordon reinvents herself as Oracle to help continue fighting off villains. Barbara Gordon’s sense of invincibility despite difficulties is what Catrina strives to emanate herself and instill in others.