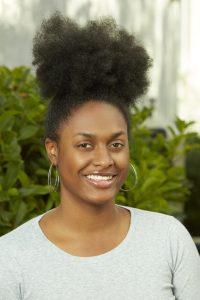 Nakia Robinson is a Las Vegas transplant from St. Louis, MO. She attended Belmont University in Nashville, TN where she received her Doctorate in Physical Therapy. She moved to Las Vegas to begin her career as a Pelvic Floor Physical Therapist where she thrives to provide a safe space for women and children. This is what drew her to SHERO.

If she were a superhero, Nakia would be DC Comics’ Thunder who has superhuman strength. Nakia identifies most with this character as she is also an African-American female who is a member of the LGBTQ+ community. Nakia believes strength comes not only from muscles but also from a person’s will to overcome obstacles and the belief that when a woman believes she can, she will.